Sexual desire is defined as desire for or fantasy about sexual activity and is characterized by an increase of locomotor activity in anticipation of sexual contact. For example, after several mating tests in a specific context, male rats display an increase of locomotor activity in anticipation of interaction with a sexually receptive female (Pfaus et al., 1990; Mendelson and Pfaus, 1989). This index of sexual motivation is easily measured in bilevel chambers. The bilevel chamber is also a useful device to measure female sexual responses (Pfaus et al., 1999). Paced mating behavior refers to the control by the female of the timing of coital stimulation she receives. Copulation in paced mating conditions is highly rewarding for the females and expression of pacing reflects their sexual motivation (Paredes and Vasquez, 1999). The bilevel chambers allow the females to pace mating by having access to another level to escape from the male. Our objective is to measure male and female sexual motivation and behavior, using the bilevel chamber paradigm.

The bilevel chamber, constructed with Plexiglas with outside dimension of approximately 51x70x15 cm (Mendelson and Pfaus, 1989), includes two levels with a platform of 40 cm in length centered and set 28 cm above the floor. A set of ramps and a narrow landing to each end of the chamber allow the animals to move freely from one level to the other. Once the animals are sexually experienced, copulatory tests are conducted to measure and compare male and female sexual responses either before (baseline) and after treatment administration, or between groups (males or females according to the goal of the study) receiving different treatments. First, males are placed alone for 5 min in the bilevel chamber (to measure their sexual motivation) and then, females are introduced for the copulatory test. 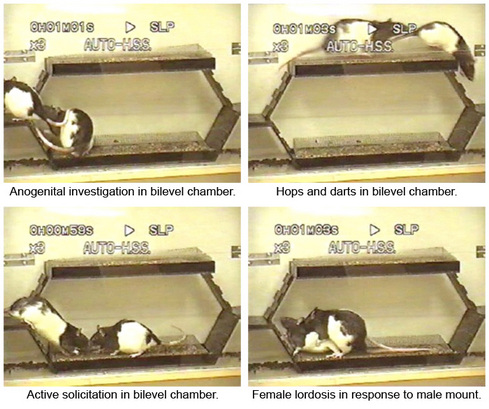