The use of Von Frey filaments is a common method to evaluate mechanical hyperalgesia in conscious rats, such as paw allodynia or visceral pain. Von Frey filaments can be used to evidence the effect of a drug on bladder pain, for instance in the IC/BPS model of cyclophosphamide-induced bladder irritation. This method is based on behavioural observations of animal response to mechanical stimuli of increasing forces applied to the pelvic area.

After bladder emptying by Credé maneuver, the rat is placed in an individual chamber and allowed to acclimate 30 minutes. Then, pain behaviour is evaluated by applying Von Frey filaments onto the abdomen in the shaved bladder area (figure 1). Eight filaments with grading force from 1.1 to 50g are serially applied (5 repeated stimulation for each filament performed every 3 minutes) and rat behaviour is recorded according to a pain behaviour rating scale. 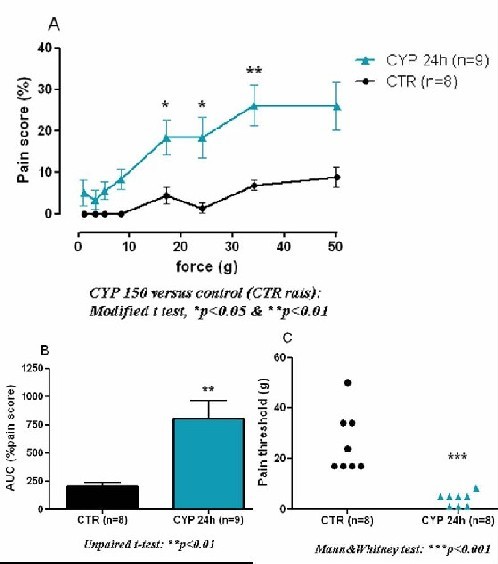